After I had finished the West Highland Way the day before, I wanted to climb Ben Nevis, Great Britains highest mountain. I could either climb the north face of the mountain which would have required skills and equipment I didn’t have … or I could just take the tourist route! That meant, I had to hike from sea level to an altitude of 1344 meters, taking between 6 to 10 hours according to my travel guide. Long and strenuous, but doable. Together with Simone, a guy from Italy, whom I met on the WHW, we set off for the beginning of the trail at the Ben Nevis Inn at around 10 o’clock.

We read about the way and the mountain in our guides which warned us, not to underestimate the tour. We didn’t – we were both a little worried about what would lie ahead of us. The weather was quite good, but we were warned, that it could change pretty quickly on the mountain, making it much more difficult and even dangerous. But after the first kilometers, we discovered, that there were – really – a lot of people on the path. Even families with kids. Our worries were blown away!

Ascending further, the fog, that covered parts of the mountain, vanished and we had a beautiful view into the valley, over Fort William and parts of the West Highland Way, we walked yesterday. The road changed often from easy with only light inclination to steep and covered with rocks. The higher we came, the more the landscape turned from green grass to grey rocks. The fog became thicker and the temperature was droping.

When we finally reached the top, I guess, it was almost 0 degrees Celsius, the view was limited to 100 meters and a very cold wind was blowing. In some gullies there was even snow. Luckily, there were ruins from an old observatory where the hikers found shelter from that wind. There was also a real storm shelter for climbers who found themselves being trapped on top by a sudden storm, the guide warned us about.

The way down was even more strenuous than the way up. I found myself slipping a few times on the rocks and was only able to keep myself from falling with my walking poles. It was also quite hard on my calves and knees, which had been tired from the walk the days before. But after just 5 hours we found ourselves back at the Ben Nevis Inn … where we celebrated our ascend with a beer! 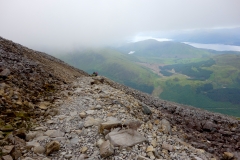 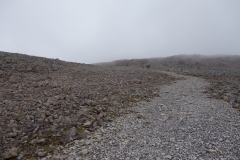 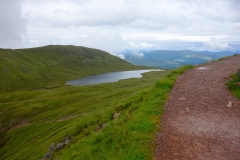 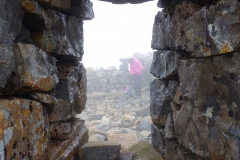 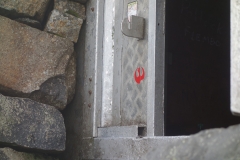 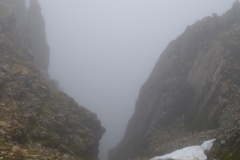 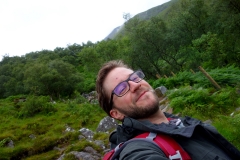 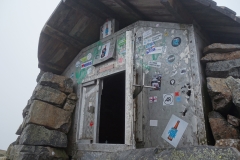 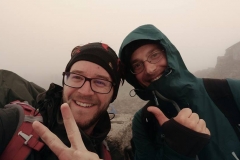